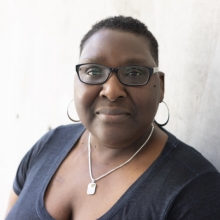 Position
Dodd Interdisciplinary Fellow
Degree Seeking
MFA
Email
anghall@uga.edu
Undergraduate Institution
Augusta State University
Undergraduate Degree
BA | English, emphasis in Creative Writing, minor in Theatre
Masters Institution
Georgia College and State University
Masters Degree
MFA | Playwriting
Hometown
Dublin, Georgia
CV
CV--Lamar Dodd.pdf
Research Detail
My research interests are quite varied; however, as an African American feminist born and raised in the South, I am particularly interested in the enigma that is the South’s beauty, warmth and charming eccentricity coupled with its horrific racial history and bursts of unbelievable brutality. Add to this already combustible mix the South’s disturbing and dichotomous reverence for the purity of white womanhood with its degradation of Black women and the results are division, pain, and guilt that have yet to be resolved. Racism, misogyny and gender violence are not unique to the South, but as an African American woman with a long-standing love/hate relationship with the South, it is this space that most intrigues me and provides the best fodder for the kind of work I do. As such, my current research project, The Pregnant Tree, engages this history as it centers on the untold stories surrounding the lynching of Black women in the South, particularly in Georgia. Who were these women? What were their lives like? What “crimes” or “offenses” were they guilty of? Their lives compel me. My project is an excavation, and a (metaphorical) resurrection. My research, then, is an investigation, and dare I say, interrogation of Southern history. However, as a writer and playwright, I look to interpret archival and historical research to transform it into creative projects that manifest as live stage performances. Such is The Pregnant Tree.
Biography

Angela C. Hall is a playwright/performer/dramaturg/researcher/college instructor from Dublin, GA. She holds a BA in English and a minor in Theatre. In 2008, Hall received an MFA in Playwriting from Georgia College and State University, and is pursuing a second MFA in Narrative Writing at the Grady School of Journalism at University of Georgia. She most recently worked at the University of Georgia as writing coach for the Institute of Women's Studies, and as an instructor with the Writing Intensive Program, a multi-disciplinary program that focuses on the critical thinking skills required for effective academic writing.

Currently, Hall is working on a commission for writers of color with Clubbed Thumb Theatre to create a play that subjectively employs “alternative structures and shapes”. She is also developing Mercy, a television series, and has signed on to be the scripter for an upcoming graphic novel, When We Bleed. Hall's one act play, Green-light, produced by Rising Sun Performance Co., recently ran off- off Broadway in New York City, and was nominated for a New York Innovative Theatre Award for Best Original Short Play. Her one act play, Wife Shop was published August 2013 in The Best American Short Plays 2011-2012 (Applause Books), and has received productions across the country. Hall's satirical antebellum melodrama, Magnolia Blossoms was produced at University of Georgia in March-April 2016 as part of the University's 2015-2016 season, and was subsequently published in The Best American Short Plays, 2015-2016. Hall has received a prestigious grant from the Wilson Center for Arts and Humanities to develop The Pregnant Tree, an epic that explores white face minstrelsy and the traumatic history of lynching in the American South.