Empty of people, what remains is the setting. A room full of curtains, fabric, so much fabric, low lighting and the displays which indicate opulence. Theater in death, the performance of grief. For the past two years, Rachel Cox has driven around Texas and now Iowa, stopping to photograph funeral homes in rural towns. Cox first noticed these strange spaces when working on an earlier photo project, Shiny Ghost, which documented her grandmother’s illness and eventual death. At the funeral home in Texas, a home her family has used throughout the years, she took a self-portrait with the displayed corpse, marking the end of the project. “The meaning of that picture changed for me over time,” Cox explains. “Looking back at it, I noticed less my image and my grandmother’s, but rather the two lamps, the curtains. The whole set-up seemed so bizarre.” 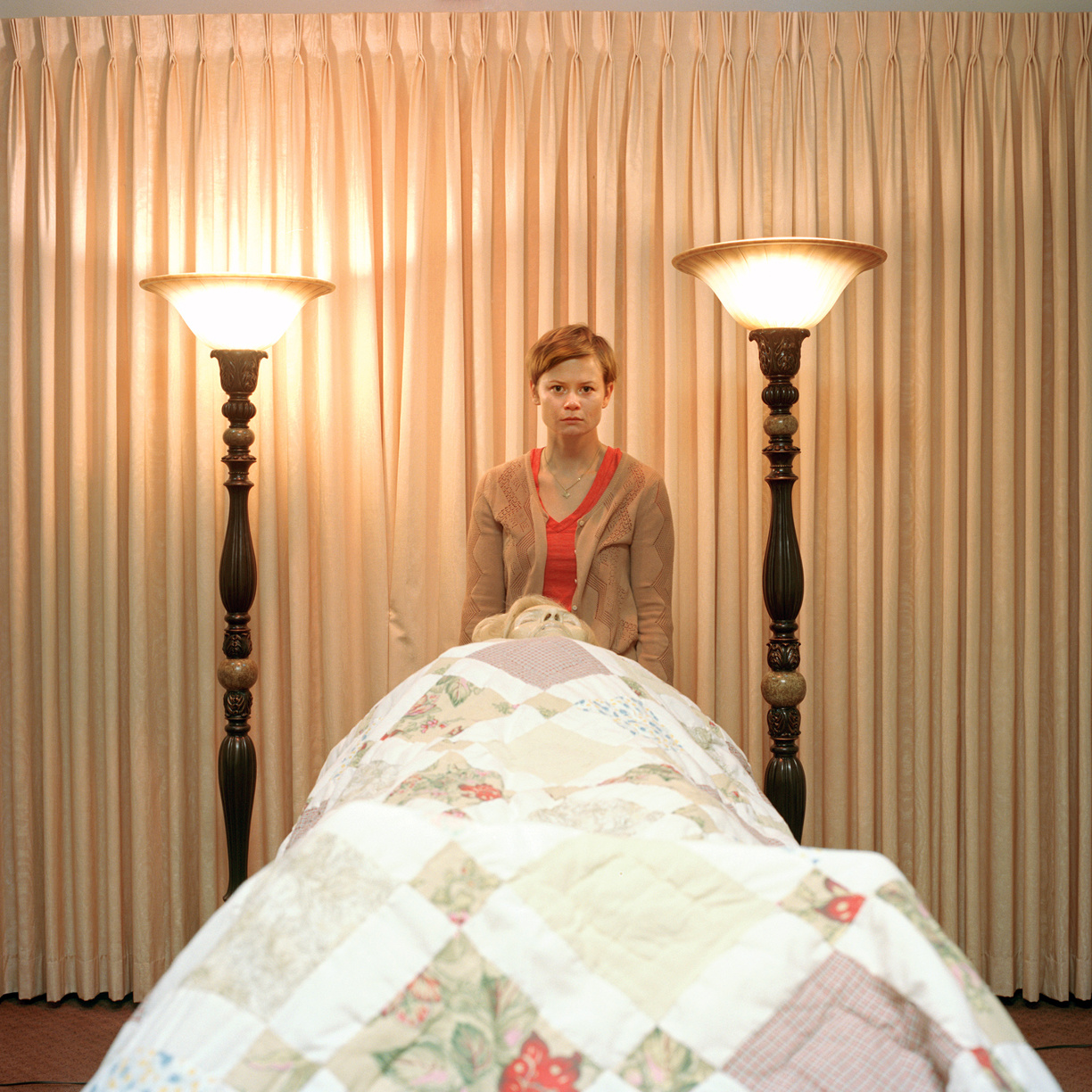 The photographs in Mors Scena document viewing rooms and visitation spaces, creating a taxonomy of interior funeral home design. Beige curtains against beige carpet. Brocade fabric and corinthian column plinths, sometimes a seemingly anachronistic flat screen TV affixed to the wall. Keyed up color, many of the photos project a pink or green hue, others are purposely neutral, reflecting the range of homes she visited. Cox became friendly with the funeral home directors in these small towns and they allowed her access as she often arranged the furniture and objects of display to emphasize these already highly constructed spaces. In this way, the photographs are just as manipulated as the rooms she shoots. What results is something like a memento mori, flimsy still lifes which remind us of the inevitably of death.

Cox sees the design of the homes representing a larger cultural phenomenon of how we memorialize the dead in America. Researching Victorian era practices of mourning as well as the rise of the middle class due to the Industrial Revolution, Cox mapped changes in attitudes toward funerary practices. She noted especially how ornamentation is a marker of status and that the trappings of the appearance of wealth continues in death just as in life.

Cox’s view of the self-portrait she made with her grandmother’s body in that first funeral home changed over time and this project too has taken on new resonances in the wake of mass deaths due to the Coronavirus. Cox sees the work at a crossroads: “I feel very unsure of it, right now,” she states. “Is it even appropriate?” Retreating to her studio, an old hospital in Iowa City where she teaches at the University of Iowa, Cox has continued the series. This time, instead of traveling to actual funeral homes, she’s constructing from scratch new visitation rooms to photograph. Laying carpet, hanging wall-paper, re-staging the staged environments built for public grieving that she now knows so well.

Rachel Cox lives and works in Iowa City, IA, where she is an Assistant Professor of Photography at The University of Iowa. Prints from Cox’s series have recently been presented at The Belfast International Photography Festival, Museo de los Artes in Mexico City, Baijia Art Museum in Nanjing, China, The Musee del'Elysee in Switzerland, Museo Amparo in Mexico, and at PHOTO London.

Cox has shown work nationally at the Houston Center for Photography, The Philadelphia Photo Arts Center, and the Atlanta Contemporary Arts Center. Her work has recently been published in TIME, Vice Magazine, The Huffington Post, Feature Shoot Magazine, Dodho Magazine, the British Journal of Photography, and The Guardian. She has forthcoming solo exhibitions at the Des Moines Art Center and the Southeast Museum of Photography.

Rachel Cox first showed at the Dodd Galleries in 2014, when she served as the Post MFA Fellow in Photography at the Lamar Dodd School of Art. You can visit that show here.