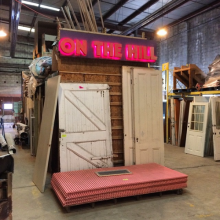 Rachel Debuque received her MFA degree at The University of Georgia. She has exhibited extensively including, New York, Taiwan, Croatia, and Philadelphia. She was an artist in residence at the Bemis Center for Contemporary Art’s residency program and a Southern Constellations Fellow at Elsewhere: A Living Museum. She currently lives in Washington D.C. and is an assistant professor at George Mason University.

Her research spans installation, sculpture, video, and performance. Debuque de-familiarizes space and objects using common decorating design strategies such as pattern, paint, and the arrangement of objects. Her work purposefully plays with two and three-dimensional realms, creating a push/pull in perceptions. Vibrant colors to create directional line patterns that suggest dimensional space and flatten objects with matte paints. The perception of home is challenged by combining the “normal” with the “abnormal.” She achieves this by playing with scale, color, and content. New meaning emerges through the relationship of the familial via cultural decoding. This allows a process of apperception: when the atmosphere is nostalgic and unfamiliar at the same time.

Many of these decisions are created through a rigorous studio practice that involves many experiments with color, space, and form. Debuque thrives on the late night energy of the studio, which allows her to immerse in new patterns of awareness. She collects objects that transition through many stages, such as becoming cast replicas or layering with coats of paint. Objects and space become the canvas for world making.