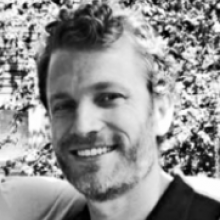 Chris received his MFA from the University of Oregon and his BFA from the University of Georgia, both classically focused in Sculpture. Completing a full apprenticeship from the Johnson Atelier Technical Institute of Sculpture in the areas of metal casting and stone carving was followed by a six year stint as a Assistant Professor and founding member of the Academy of Visual Arts at Hong Kong Baptist University, in Hong Kong, China. Now amongst other limited term positions at Indiana University, Georgia State University & University of North Georgia Chris currently speaks as a visiting professor offering specialized symposiums and guest lectures.

Rothermel's work demands participation with strong lines contrasted with rare materials. His works are & have been exhibited in shows throughout the United States & Internationally. His private work gallery representation includes New York City, New Jersey, Maine, Oregon and Georgia. His work is privately collected throughout the United States and Asia.

CercaTrova®, a handpressed stone product that began as as common language between sculpture & design was developed in 2014 by Chris & his wife designer Laura Green Rothermel and is being introduced to the market now project by project. It's hardness lies somewhere between marble and granite, it's exquisite look makes it the 'Faberge' of the design world. For more information visit: www.cercatrovatm.com

Sculpture by immersion and as experience has led to a product line of accessories that services the Boutique Hotel Industries To The Trade. Available soon in the US.