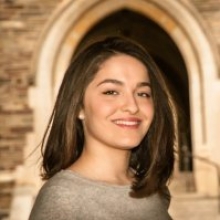 Catherine J. Huff received her BA in Art History from the University of Georgia in May 2017. During her undergraduate career, she was a museum docent, held a chair position in the art history society, and was a curatorial research intern in American Art at the Georgia Museum of Art. In the Winter of 2016, Huff curated a focused exhibition for the Georgia Museum of Art titled Man’s Canyons: New York City on Paper. The show was awarded 2016 Student Project of the Year from the Georgia Association of Museums and Galleries. In Spring of 2017, Huff was awarded a $1,000 grant towards independent research in art history. Her research, mentored by Alisa Luxemberg, focused on the evolution of taste in 19th century American painting through formal analysis and original research into provenance, market history, exhibition history, and critical reception. She presented this research project, Desires for Difference: Tastes and Collecting of Later Nineteenth-Century American Paintings, at the 16th Annual Georgia Undergraduate Art History Forum and at the 2017 UGA CURO Research Symposium.

Shortly before graduating in February of 2017, she received a position as curatorial assistant in American Art at the High Museum of Art in Atlanta, Georgia, and promoted to Curatorial Assistant of American and European Art in 2018. Stephanie Heydt, the Margaret and Terry Stent Curator of American Art, and Huff are the duo that make up the High's American Art curatorial department. Their most recent work can be seen in the 2018 Fall Permanent Collection Reinstallation or the 2019 Fall exhibition, Something Over Something Else: Romare Bearden's Profile Series.

She plans to further her education in graduate studies in art history in the coming years.