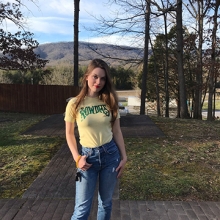 Degree Seeking
MFA
Area of Study
Studio
Email
rose.brock@uga.edu
Undergraduate Institution
School of Visual Arts, New York
Undergraduate Degree
BFA | Photography & Video
Hometown
St. Petersburg, FL
CV
curriculum vitae
Research Detail
Employing her own lineage and ancestral stories as an access point, Brock is currently producing a photographic and textual narrative that grapples with the threat of violence, existing in a multitude of forms, in the context of the American South. Residual and inherited generational traumas serve as the crux of the work, allowing for themes of identity formation, gender, imprisonment, sin, and redemption to emerge. Her research interests include the cultural significance of Christian theology, regional folklore and storytelling, crimes against women, feminism, and acts of violence in literature, cinema, and music. The experiential element of aimless driving and sudden encounter is integral to her practice and as such, her work is undeniably informed by the canon of American road-documentary photography. While cognizant that she is working within a well established photographic genre and employing connotated visual language, her images are not intended to function didactically or disseminate a particular, unequivocal “truth.” Rather, Brock is most intrigued by the medium's ability to entangle and disrupt the distinction between real and fictitious. This slippage is mirrored in her photographs which occupy an intermediary space between straight and staged imagery. Text, in the form of short stories, transcriptions, and stream of consciousness writing further advance a sense of unsettling ambiguity. Through her work, Brock investigates her own positionality and subjectivity as related to region and background.
Biography

Rosie Brock is a photographer and writer based in Athens, Georgia. She is currently an MFA Studio Art candidate at the Lamar Dodd School of Art and holds a BFA in Photography and Video from the School of Visual Arts in New York City. Her work has been published by Oxford American, Photo District News, and The New York Times. She was named as a Flash Forward 2019 winner by The Magenta Foundation and as a finalist for Film-Photo Award’s student grant. During 2018 Brock was a student winner in the PDN Photo Annual, as well as a runner up in the Burn Magazine Emerging Photographer Fund.