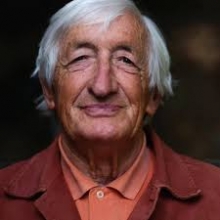 Olivier Strebelle is one of the most symbolic artists of his country. Born into a family of artists in Brussels in 1927, he starts taking classes in ceramics and sculpture at the age of 15. In 1949 together with Alechinsky, Reinhoud, Dotremont and Olyff, he founds "Les Ateliers du Marais", headquarter of the art movement "Cobra".

For Olivier Strebelle, the manner in which he constructs his sculpture, has always dictated their definitive form. As early as 1949 his work, composed of free and individual elements, began to organize itself following a principle of construction unique to each sculpture. Olivier Strebelle has been following two main lines of research after he abandoned his original path of expression, ceramics:

Sculptures in environment designed in the context of architecture or urbanism, a context ever present in the history of man and property.

Sculptures as objects small at first, they are made to be within reach of the hand, in the intimacy of a home or as part of a monument; sometimes they are automated by a mechanical structure, which transforms them according to an inexorable cycle (spectacle sculptures); at other times they are created large to be placed in nature like a tree or rock emerging from the ground (landscape sculptures).