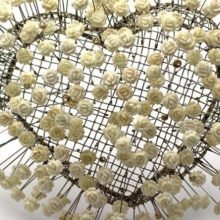 Lola Brooks began her arts education at Pratt Institute and then went on to study with Jamie Bennett and Myra Mimlitsch-Gray at SUNY New Paltz. In 1996 Lola was included in the Talente exhibition in Munich and since then has participated in many gallery and museum shows around the country including Sparkle then Fade at the Tacoma Art Museum, Tacoma, Washington. Lola's use of stainless steel drives the conceptual content of the work and her underlying interest in material hierarchies. The Recipient of the Sienna Gallery Emerging Artist Award in 2002, Lola's work has been reviewed and/or included in many publications including four of the Lark Books jewelry series; American Craft, Metalsmith, Out, W, Vogue and BlackBook magazines.