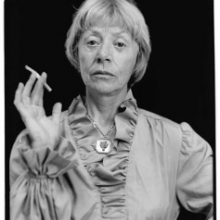 Elaine de Kooning was a prominent American painter known for her skill as a portraitist. Her energetic figurative works provided an important perspective in the milieu of Abstract Expressionism. Born Elaine Fried on March 12, 1918 in Brooklyn, NY, she went on to study at Hunter College and the American Artists School. Early on in her career, she gained prominence in the New York art scene, becoming a member of the Eighth Street Club alongside Franz Kline, Clyfford Still, and Hans Hofmann. During her mid-20s, she married her former teacher the painter Willem de Kooning, with whom she maintained a long and often tumultuous relationship.

Throughout her career, De Kooning often painted friends and contemporary figures, including a commissioned portrait of President John F. Kennedy. In the next few decades, the artist worked in a style influenced by prehistoric cave paintings and held teaching positions held at institutions such as the University of Pennsylvania and Yale University. De Kooning died on February 1, 1989 in Southampton, NY. Today, the artist’s works are held in the collections of the National Gallery of Art in Washington, D.C., the Solomon R. Guggenheim Museum in New York, and the Kemper Museum of Contemporary Art in Kansas City, among others.