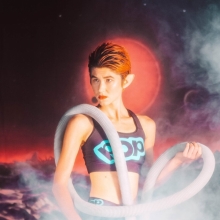 Degree Seeking
MFA
Area of Study
Studio
Undergraduate Institution
Watkins College of Art, Design & Film
Undergraduate Degree
BFA Fine Art
Hometown
Birmingham, AL
CV
CV
Research Detail
Through character making, AC investigates ideas about love, gender deviancy, and authenticity and challenges the idea that the individual is singular, rather than multiple in design. Identity is tied to the body both physically and virtually; it is a continuous site of construction and can be understood as both a building and a webpage.

As their musical persona Klypi - they are a self-identified elf, hoping to expand our ideas beyond boy and girl. As their fashion designer persona Lambda Celsius (Λ°C) - AC foregrounds the notion of fluid identity by thinking of materials and bodies as non-gendered -- interpreted as shape, color, and form. And last - as their student persona at UGA, AC performs as PhD Candidate in Art Herstories Vixcine Martine, hoping to challenges ideas of what humor, sexuality, and intelligence can look like, playing with how to navigate and scholarly reflect upon their other selves.
Biography

As a musical performer, AC has opened for artists such as Molly Nilsson, John Maus, and Girlpool, and has performed at Big Ears Festival, Athens Popfest, and Secret Stages.

As a fashion designer, AC have made garments for Jennifer Vanilla for her performance at MoMA PS1, and for the band of Montreal for their music video "Plateau Phase-No Careerism No Corruption”.

Last, AC also curates and organizes Ad•verse Fest, a festival for solo and duo performers cross genre underscoring DIY experimental and electronic scenes in the South and across the continental US.